Skip to content
Distributed mass balance models, which translate micrometeorological conditions into local melt rates, have proven deficient to reflect the energy flux variability on mountain glaciers. This deficiency is predominantly related to shortcomings in the representation of local processes in the forcing data. We found by means of idealized large-eddy simulations that heat advection, associated with local wind systems, causes small-scale sensible heat flux variations by up to 100 Wm2 during clear sky conditions. Here we show that process understanding at a few observation sites is insufficient to infer the wind and temperature distributions across the glacier. The glacier-wide hourly averaged sensible heat fluxes are both over- and underestimated by up to 16 Wm2 when using extrapolated temperature and wind fields. The sign and magnitude of the differences depend on the site selection, which is used for extrapolation as well as on the large-scale flow direction. Our results demonstrate how the shortcomings in the local sensible heat flux estimates are related to topographic effects and the insufficient characterization of the temperature advection process.

The model domain comprises a major part of the contiguous glaciated area covering the northern section of the Cevedale Massif, the summit of which is the highest point of the study area (3769 m a.s.l.). Three glaciers connected to each other are the focus of the study: Fürkele Ferner, Zufallferner and Langenferner. The surface area of the glaciers is about 6.62 km (2013) with an altitudinal extent from about 3750 m a.s.l near the summit of Hintere Zufallspitze, down to 2595 m a.s.l. at the lowest point of Zufallferner. The model domain includes a wide variety of topographic features such as steep slopes up to 50˚ glaciated and unglaciated (summit) ridges of various aspects, as well as larger glacier sections with smooth terrain and low slope angles. The mean slope angle of the glacierized terrain is 17◦. The topography can be regarded as (i) typical for many glaciers in the European Alps and (ii) highly suitable for investigating the complex interaction of large-scale (synoptic) forcing and small-scale topographic features 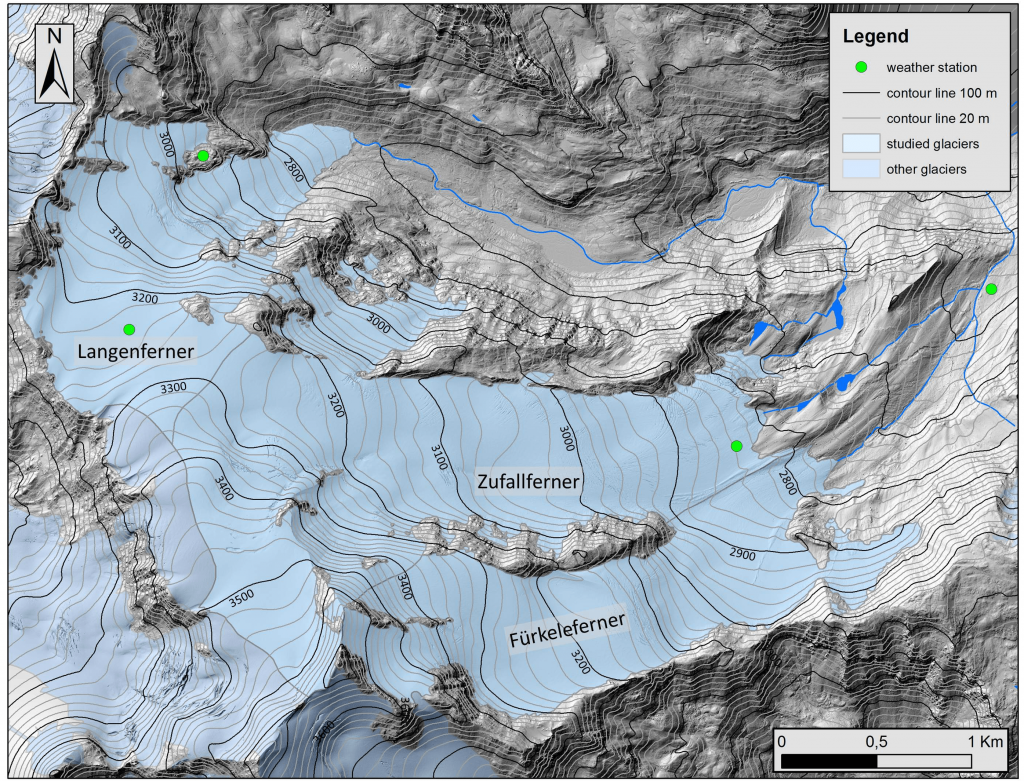 Figure 1. Map showing the surface topography of the studied glaciers and the surrounding terrain. 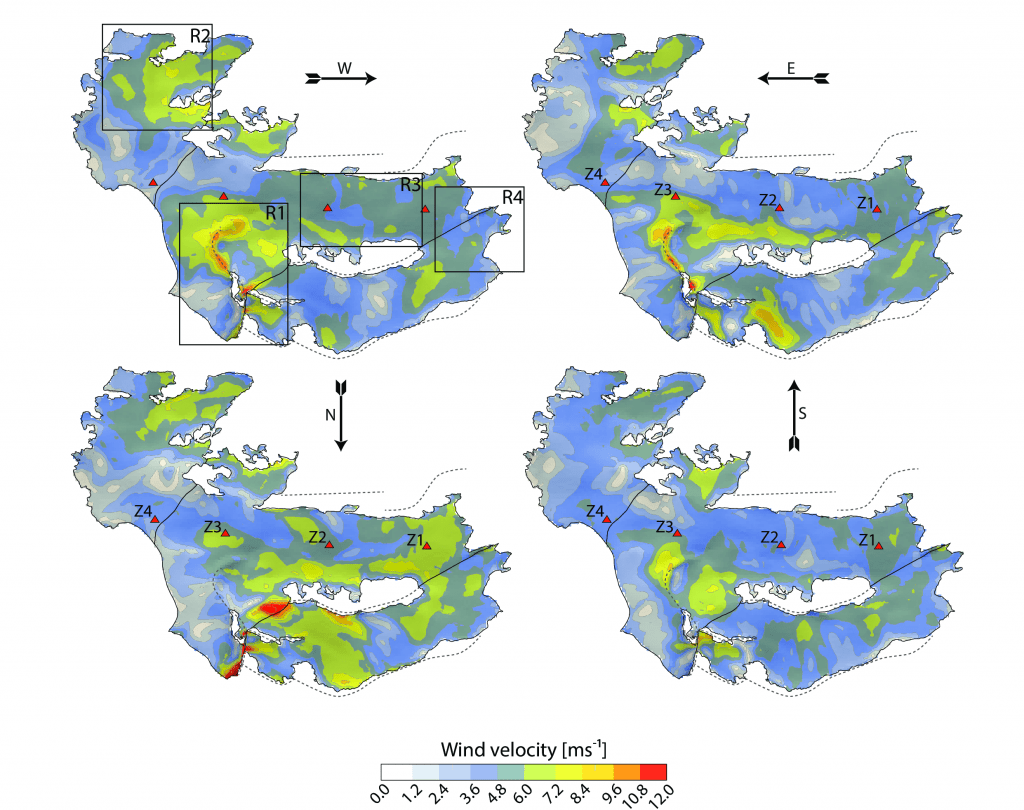 Figure 2. Mean velocity of the surface wind fields (2 m) for each of the four Large-Eddy case experiment. The four boxes R1–4 and the sites Z1–4 define regions and locations on the glacier which are used for discussion in the results section. The grey dashed lines represent sharp ridges in the study area. 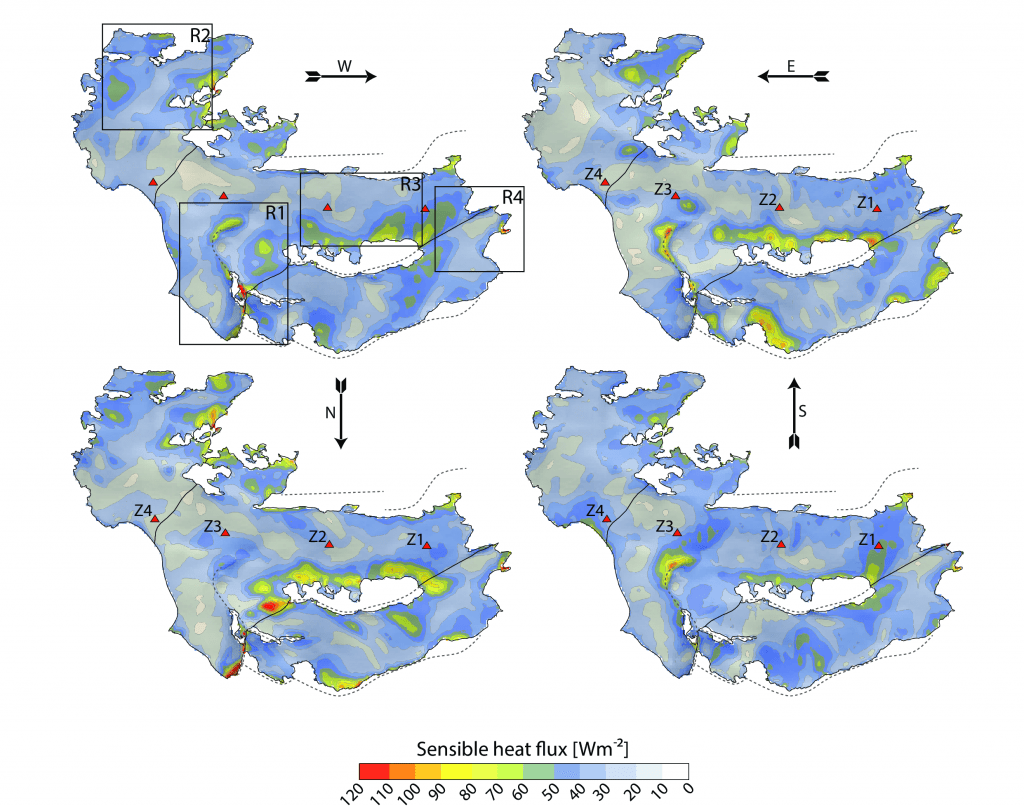 Figure 3. Mean sensible heat flux from the LES runs for each of the four case experiments.

Physically based distributed mass balance models are often applied to translate the local-scale weather conditions into net mass gain and loss at the glacier surface. The ablation process, which removes ice and snow, is controlled by the net energy balance at the ice–atmosphere interface. Direct measurements of energy balance components exist in most cases only for radiation, while surface heat and moisture fluxes are rarely measured directly on glaciers. The simplest and most widely used method to parameterize the turbulent energy exchange from available meteorological observations is the bulk approach. Figure 4 shows the differences between the LES and the calculated sensible heat fluxes using the linearly interpolated temperature fields together with the bulk method. As the air temperature, roughness lengths and Monin-Obukhov lengths are known from the LES, the discrepancies must be the result of the insufficient characterization of the spatial wind velocity and air temperature fields. 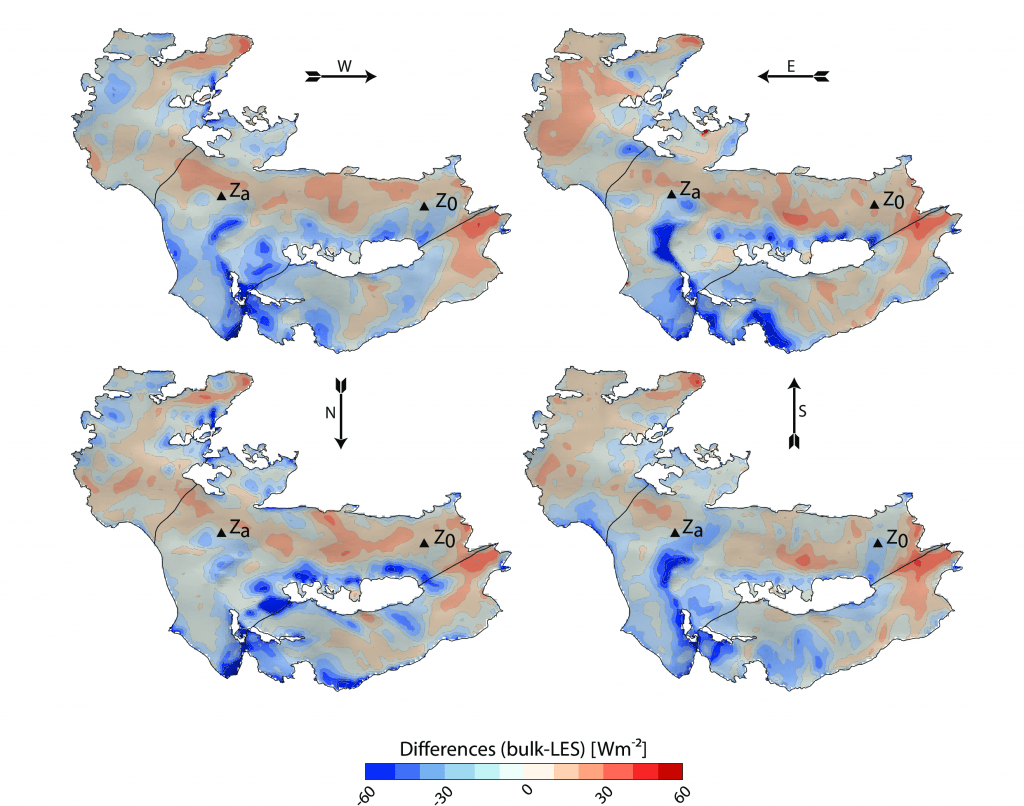 Figure 4. Differences in the mean surface sensible heat fluxes between the LES and the bulk method for different wind direction. Positive differences correspond to an overestimation of the surface heat flux by the bulk approach

The standard deviation of the vertical velocity fluctuations is heavily right skewed on the glacier (see Sauter and Galos, 2016), which is a good indication of occasional mixing events embedded within the turbulence. Several studies observed intermittent turbulent mixing events in the SBL above glaciers and analyzed their impact on the surface energy balance (e.g., Cullen et al., 2007; Oerlemans and Grisogono, 2002; Söderberg and Parmhed, 2006; van den Broeke, 1997; Smeets et al., 1998; Munro and Davies, 1978; Hoinkes, 1954; Kuhn, 1978; Munro and Scott, 1989). Single mixing events may have only little impact on the time-averaged quantities, but the intermittent heat supply can be substantial for the melt energy (Oerlemans and Grisogono, 2002; Dadic et al., 2013; Mahrt, 2010; van den Broeke, 1997). Local turbulent mixing events are driven by the characteristics of local turbulence, submeso motions, and the large-scale flow (Helgason and Pomeroy, 2012; Poulos et al., 2007; Högström et al., 2002). Non-local topographic effects,such as gap flows or bluff bodies, can favor the probability of periodic occurrence of burst events at a given point on the glacier, shaping the local micrometeorological conditions (Söderberg and Parmhed, 2006; Litt et al., 2015).

The vertical mixing of momentum and heat is a nonstationary process with changing frequency and inten sity across time (Torrence and Compo, 1998; Roesch and Schmidbauer, 2014). Therefore, it is convenient to analyze the frequency structure of recurrent intermittency by decomposing the temperature signal into time–frequency space using wavelets. To illustrate the characteristics of intermittency we have calculated the wavelet power spectrum of the temperature signal at Z2 (southerly flow). Figure 5 shows the normalized wavelet spectrum and the average power taken over time. The global spectrum shows that most of the power is concentrated around 90 s. There are variations in the frequency of occurrence and amplitude of the mixing events. On average episodic mixing events occur every 10 min and last for about 90 s. The wavelet spectrum differs at each site and flow (not shown), but characteristic events are present in all cases. The frequency structure of the recurrent mixing events implies that the surface layer is episodically affected by anisotropic large-scale eddies. The turbulence scales are on the same order of magnitude as those found by other studies (e.g., Litt et al., 2015; Söderberg and Parmhed, 2006). Since the stable stratification is weak in the surface layer (Bulk Richardson Number ~0.04), it is very unlikely that the downward-directed sensible heat flux is strong enough to explain these large differences. 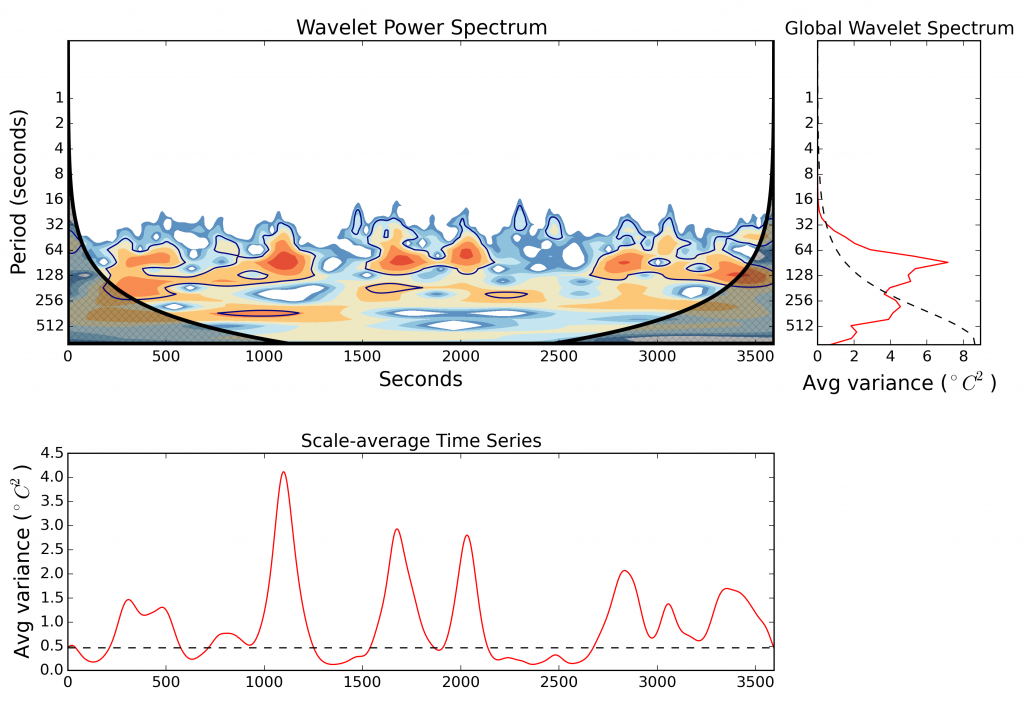 Some theory on glacier winds, turbulence and intermittency

Given the complex mountain topography around alpine glaciers, it is not trivial to find a direct link between the large-scale atmospheric state, which is usually provided by coarse models and the local-scale weather conditions at an individual glacier. In most cases this requires a profound understanding of the interaction of large-scale flow and the thermally induced wind systems. In particular, katabatic flow associated with the stable boundary layer (SBL) develop above glacier when advection of warm air over the much cooler glacier surface leads to a strong stratication and downward directed buoyancy flux. The permanent cold glacier surface produces a shallow cold air layer above the ground, which drains down the slopes following the local topography. The development of persistent shallow (5-100 m) downslope winds above glaciers are a well known phenomena and commonly referred to as glacier wind. The characteristic and intensity of the glacier wind is governed by the interplay of buoyancy, surface friction and entrainment at the upper boundary of the SBL. Near the surface the wind is usually calm and the wind velocity gradually increases with height, frequently forming a pronounced low-level jet (LLJ). Above the LLJ winds gradually changes to geostrophic.

Under stable conditions the buoyancy flux (BD, buoyancy damping) suppresses turbulence near the surface, representing a loss term for the turbulent kinetic energy (TKE) budget, thus supplementing the viscous dissipation. Turbulence is mainly gained by shear production (SP) through interactions of Reynolds stresses and the mean velocity gradients. There is a delicate balance between the generation of turbulence by shears and damping by buoyancy. If the buoyancy destruction due to strong vertical stratication exceeds the generation by shears, turbulence might eventually extinguish. The dimensionless Richardson number (Rf) expresses the ratio of these fluxes and is often used to characterize the dynamic stability and capability of the flow to remain turbulent. 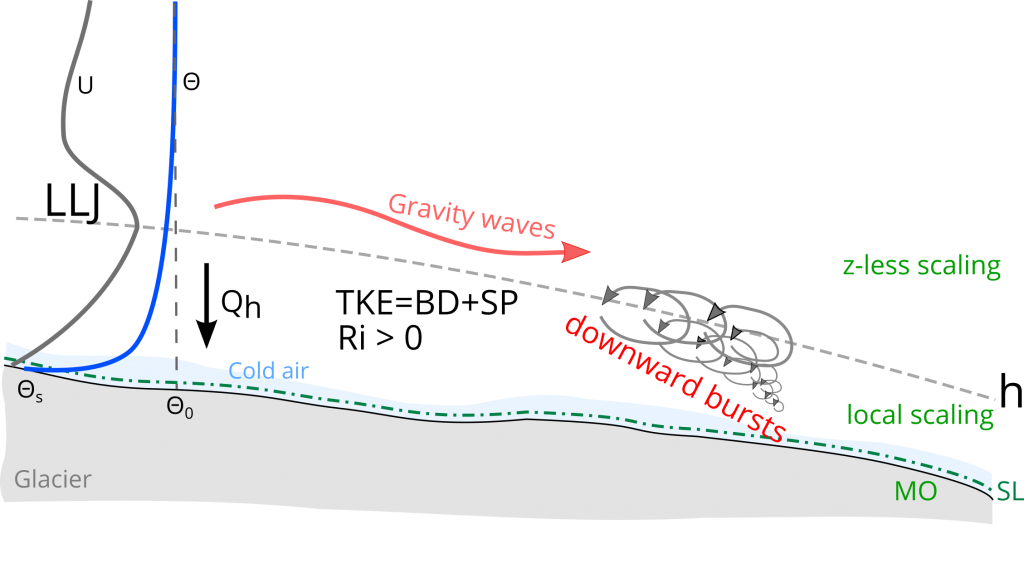 According to the Kolmogorov energy-cascade, the rate of dissipation is determined by the transfer of energy from the largest energy-containing eddies through the inertial subrange [Pope, 2000]. The buoyancy flux mainly impacts the largest scale of motions and shuts down the energy transfer to smaller scales. In particular in very stable conditions, (Rf > 1), the strong downward heat flux may completely suppress turbulence and the boundary layer can develop an upside-down character, where turbulence and flow are detached from the surface [Derbyshire, 1990; Mahrt, 1999]. The decoupling can be accompanied by an acceleration of the flow aloft and the development of a LLJ [Smedman et al., 1997]. Generation of turbulence by strong wind shears in the LLJ region may temporarily recouple the elevated turbulence with the surface. Triggered by the wind shears, isolated events of strong turbulent mixing of heat and momentum can occur (downward bursts). The mixing process reduces the shears and, consequently, the production of turbulence. During mixing, the destruction of turbulence by buoyancy becomes the important term (Rf increases) and turbulent ceases. The relatively quiescent boundary layer allows again to build up the shears.