Skip to content
In high Arctic regions, redistribution of snow mass by wind drift impacts the mass balance of glaciers. Particularly along the margin of larger ice caps, persistent katabatic winds become often strong enough to effectively remove snow from the surface and re-accumulate the eroded snow mass within the surrounding areas. This study provides a first quantification of snowdrift and sublimation of blowing and drifting snow on the Vestfonna ice cap (Svalbard) by using the specifically designed snow2blow snowdrift model (based on the OpenFOAM framework). The model is forced by atmospheric fields from the Polar Weather Research and Forecasting model for the period 2008/2009, and resolves processes on a spatial resolution of 250 m. The findings indicate that there is a significant redistribution of snow mass from the interior of the ice cap to the surrounding areas and ice slopes. Drifting snow sublimation of suspended snow is found to be stronger during spring. There are several lines of evidence that the redistribution process is strong enough to have a significant impact on glacier mass balance.

Figure 1: Drifting snow frequency (left) and interseasonal variability (right) of the mean snowdrift sublimation within the near-surface layer (below 10m) for the period September 2008 to May 2009. The drifting snow frequency is defined as the ratio of days with non-zero erosion flux and the total number of days. The locations of snow-pit measurements are denoted as red dots. The blue line shows the radio-echo sounding profile of Grabiec et al. (2011) in May 2009. In the interseasonal variability plot the boxes spread between lower and up- per quartiles of the values with the median shown as the thick line in between, the whiskers extend the boxes by 1.5 times the interquartile range. Values outside this range are considered as outliers.

Blowing and drifting snow are frequent processes (10–25%) which significantly modify snow accumulation distribution of the entire ice cap. In particular, along the wind exposed zones about 10–20% of the primarily accumulated snow is redistributed to peripheral zones and must be considered a loss term for the ice cap mass balance. In this way, ice bodies such as the De Geerfonna receive up to 20% additional snow mass. Based on the results, three characteristic erosion zones can be identified on Vestfonna ice cap: (1) inversion zone, decrease of snow water equivalent (SWE) with altitude; (2) precipitation zone, increase of SWE similar to the precipitation gradient; and (3) redistribution zone, where the spatial distribution of snow is characterized by blowing and drifting of snow triggered by the paramount flow. These zones correspond to snow radar observations of Grabiec et al. (2011). Whether blowing snow from sea-ice surfaces provide additional snow mass is still an open question. There is a pronounced variation in drifting and blowing snow sublimation during the simulation period with a maximum in April/May with mean sublimation rates of 2–3%, and a minimum in winter with mean rates between 1–2 %. These rates could be overestimated by the model and must treated with caution.

State of the art numerical snowpack models essentially rely on observational data for initialization, forcing, parametrization and validation. Such data are available in increasing amount, but the propagation of related uncertainties on the simulation results has received rather limited attention so far. Depending on their complexity, even small errors can have a profound effect on simulations, which dilutes our confidence in the results. This paper aims at quantification of the overall and fractional contributions of some archetypical measurement uncertainties on snowpack simulations in Arctic environments. 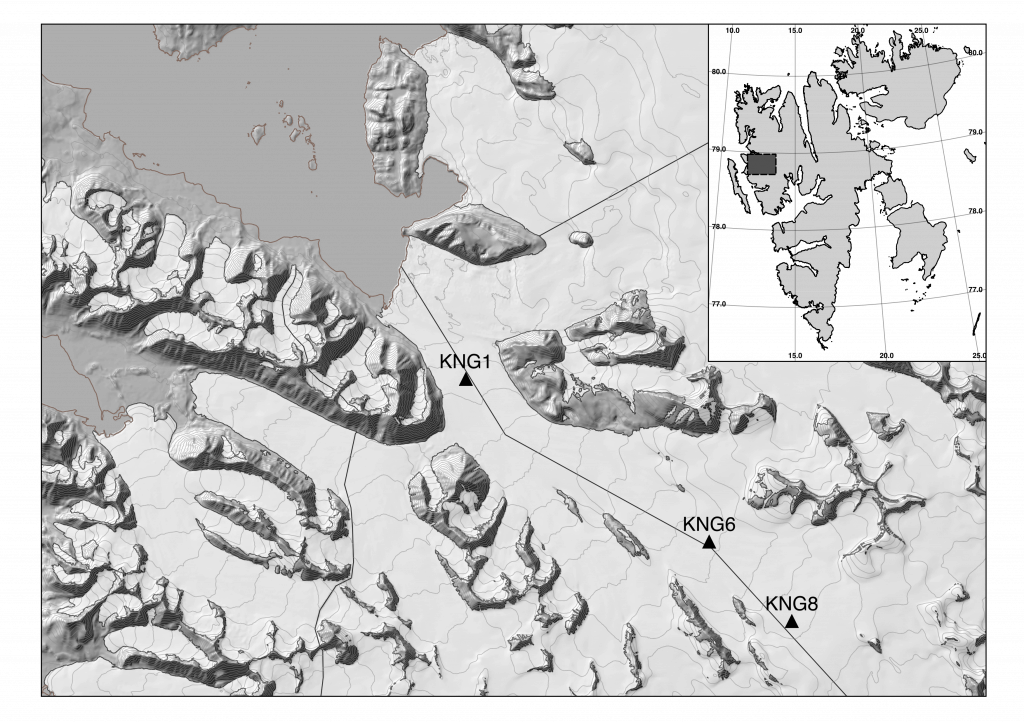 Figure 1: The map shows the location of Kongsvegen glacier and the position of the automatic weather stations KNG8, KNG6 and KNG1 (Norwegian Polar Institute, 2014).

The sensitivity pattern is studied at two sites representing the accumulation and ablation area of Kongsvegen glacier (Svalbard) using the snowpack scheme Crocus. The contribution of measurement errors on model output variance, either alone or by interaction, is decomposed using Global Sensitivity Analysis. This allows investigation of the temporal evolution of the fractional contribution of different factors on key model output metrics, which provides a more detailed understanding of the model’s sensitivity pattern. The analysis demonstrates that the specified uncertainties in precipitation and longwave radiation forcings had an outstanding influence on the calculated surface height changes and surface energy balance components. The model output sensitivity patterns also reveal some characteristic seasonal imprints. For example, uncertainties in longwave radiation trace on calculated surface energy balance rather continuous throughout the year and at both study sites, while precipitation exerts most influence during winter and at the upper site. Such findings are valuable to identify critical parameters and improve their measurement and correspondingly updated simulations may shed new light on the confidence of results from snow or glacier mass and energy balance models. This matters for many applications in the fields of e.g. avalanche and hydrological forecasting.